Since it’s creation in 2017, the Elite Charolais Heifer Sale has established itself as the number one Charolais female sale in Ireland. It’s success speaks for itself, breaking record averages and clearances across all breeds in 2020. It’s reputation meant this year 115 Charolais heifers entered for the sale, the largest entry since it’s debut in 2017. A smaller number than catalogued went under Tom Cox’s hammer, resulting in a 68% clearance, with the average sale price settling at just over €3,230. Some may say a sticky trade compared to previous years, but the fact that more heifers sold on Saturday than any other year speaks volumes. 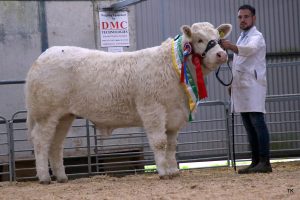 Leading the trade at €7,500 was the Intermediate Champion, Aquanchoua Summer ET, exhibited by Shane Maguire from County Meath. Bred by Peter Mc Loughlin in County Cavan, Summer is a daughter of the Bova AI sire, Hideal, and a CF 52 bred dam. Born in March 2021, Summer carries one copy of the Q204X gene. She sold to fellow Meath man Chris Murray. 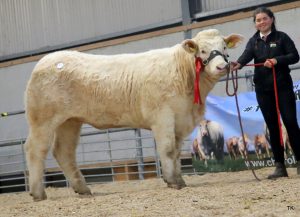 Next best in the sales ring was Baurnafea Sunrise at €6,500, for John Bambrick from County Kilkenny. This first prize winning heifer is a daughter of the herd’s French stock bull Baurnafea Nelson, and a Loulou bred dam. At just over 17 months old, Sunrise carries an impressive set of indexes along with a calving figure of just 3.9% on beef cows. Buyer of this one was Owen O’ Neill from County Carlow. 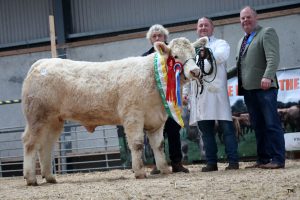 Trading at €5,600 was the Overall Junior Champion, Portnason Suzette, the property of Edward Vaughan from County Donegal. This stylish young heifer is a daughter of the promising AI bull, Mornity Nero, and a homebred dam by First. At just 14 months old, once again figures were in abundance, along with one copy of the Q204X gene. Andrew Mc Cammond from Northern Ireland had the last call on Suzette. 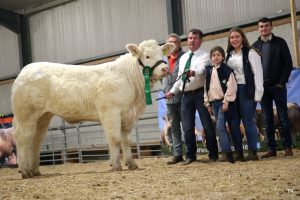 Up next at €5,300 was Inismurray Skye ET, from Paul Burke in County Sligo. Another classy young heifer, this one is a daughter of Whitecliffe James and the Goldstar Echo bred cow, Liscally Ocean Breeze. Having been shown successfully this summer, Skye went to sale with two copies of the F94L profit gene. Wrapping her up in the sales ring was Ciaran and Tony O’ Donnell from County Roscommon. 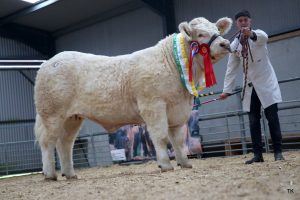 Judge David Connolly of the Brigadoon herd in Northern Ireland awarded the Senior Championship to the 20 month old Breaghwyhill Surprise. A daughter of Goldstar Ludwig and a Thrunton Bonjovi bred cow, Surprise was withdrawn from the ring unsold, but later sold to Colm and Louise Quinn’s Ballym herd for €5,250. 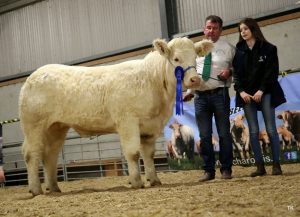 The Burke’s were back in the money again when they realised €4,300 for the second prize winner Inismurray Sofie ET. A full sister to the aforementioned Inismurray Skye, this July 2021 born heifer catalogued with a terminal index of €164 and carries one copy of the F94L gene. Buyer of this one was Cathal and Thomas Gormley from County Roscommon. 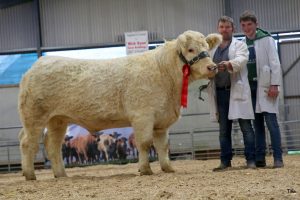 Two lots exchanged hands at €4,200. This first of which was Islandview Ruth exhibited by Thomas and Ben Mc Laughlin from County Donegal. This two year old heifer is a daughter of Roughan Mischief a homebred dam by Hideal. Scanned in calf to Lapon, Ruth carries one copy of the F94L gene and a calving figure of just 4% on beef cows. Snapping this one up was Jimmy Kelly from County Limerick.

Also selling at €4,200 was Cloughbrack Raisin for Mattie Kelly from County Galway. Another daughter of Whitecliffe James, Raisin sold in calf to the easy calving French sire Chic. Having the final call on this one was Alan Quin  from County Roscommon.

€4,000 for Crossmolina sky sired by Pirate and bred by Alan Wood from County Mayo

€4,000 for Scardaune Samantha sired by Scardaune Ollie and exhibited by Oliver and Daniel Conway from County Mayo

€3,800 for Ballynabreen Silver sired by Thrunton Fairfax and exhibited by John Mc Dermott from County Donegal

€3,800 for Roscarbon Sunny sired by Deeleview Major  and exhibited by Kevin Scollan from County Leitrim

The Society would like to wish all buyers the best of luck with their heifers from Saturday’s sale. The next Society Sale is the Christmas Cracker Bull Sale, which will take place in Elphin Mart on Saturday the 3rd December. This will see 98 top quality Charolais bulls go under the hammer. Catalogues will be available on our website from the 22nd of November, after the next run of ICBF genetic evaluations.