The Christmas Cracker sale has established itself as the number one Charolais bull sale in Ireland for many years now. Last year saw the average sale price rise to it’s highest ever at €4,994. This year’s sale went that bit further, with 66 Charolais bulls averaging €5,100, a record breaking average for a Society bull sale in Ireland. It was obvious that buyers were select in their choices, and were willing to pay a premium price for those bulls. Buyers came from Scotland, Northern Ireland and all over Southern Ireland. A total of 20 bulls went for export on the day. 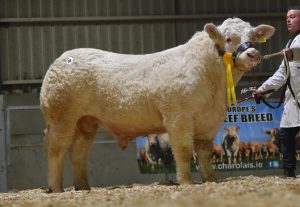 Topping the trade at €13,500 was Bud Stratos ET, the property of Olivia Purcell from County Meath. This 15 month old CF 52 son is a full brother to the Dovea AI sire, Bud Orpheus. His dam Western Icon is a Pirate daughter whose ET calves a proving highly successful for the Purcell’s. Having been placed third in the pre-sale show, Stratos went to sale with a five star terminal index of €155 and one copy of the Q204X gene, making him an appealing option to suckler farmers. After a marathon of bidding, Aidan Hearty from Northern Ireland had the last call. 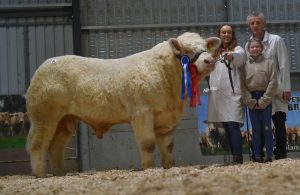 Next best at €10,800 was Sagesse Sidney ET, bred by the Canning family in Sligo and exhibited by David Watts from County Galway. Once again CF 52 was the sire, with Kilcumreragh Grimaldi as the dam. This October 2021 born bull stood Reserve Overall Junior Champion in the pre-sale show under the watchful eye of Judge Will Owen from Wales. Sidney catalogued with one copy of both myostatin genes and carries a five star terminal index of €153. He sold online to Mark Wattie’s Tonley herd in Scotland. 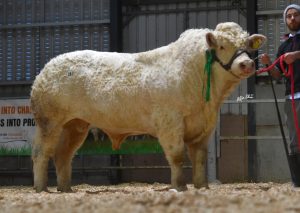 Two bulls exchanged hands at €10,200. The first to do so was Tawny Super Dude exhibited by Ciaran Daly from County Leitrim. Sired by the AI sire First and out off a CF 52 bred cow, this July 2021 born bull went to sale with two copies of the Q204X gene, a calving figure of just 3.7% on beef cows, and a massive terminal index of €171. Having received bids from all corners off the ring, Tom Cox eventually dropped the hammer on this one to Seamus Walshe from County Roscommon. 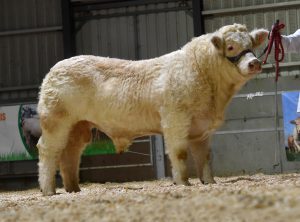 Also hitting the €10,200 mark was Williamstown Sam exhibited by Aidan Farrell from County Westmeath. This stylish September 2021 born bull is a son of the one and only CF 52, and a Major bred dam. He catalogued with a terminal index of €144 and a calving figure of 8.1% on beef cows. Fellow Westmeath man Vincent Kenny was the lucky buyer on this occasion. 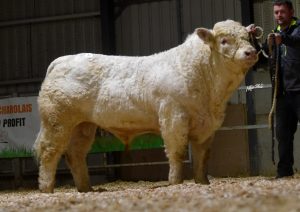 The last bull to reach the €10,000 mark was Cloonglasna11 Socks ET for the Egan brothers from County Mayo. A son of Balmyle Vagabond and Cloonglasna11 Jenny, a CXY daughter, this 13 month old bull was the pick of Dovea Genetics for their AI stud. He joins the station carrying two copies of the F94L profit gene, accompanied by a calving figure of just 5.2% on beef cows, and a terminal index of €163. 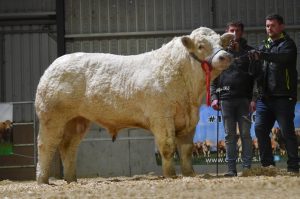 It turned out to be a day to remember for the Egan brothers, when their second offering Cloonglasna11 Sean ET went under the hammer at €9,600. A full ET brother to Socks, this one carries one copy of each Myostatin gene, and an eye catching terminal index of €174. He sold to Colin Newell in Northern Ireland. Egan’s day to remember did not stop there, they went one better when their final offering Cloonglasna11 Sambuca ET sold for €6,400. Again a full ET brother to their previous lots. This rounded off a phenomenal day’s trading for the young Mayo breeders.

Two bulls traded at €8,000, the first of which was Kilcommon Sean ET, a Domino bred bull off an Anside Foreman daughter. Exhibited by Tom Ryan from County Tipperary, once again terminal indexes were in abundance along with one copy of both both myostatin genes. He sold to a suckler farmer in County Kilkenny.

Sheehills Santiago ET from John Searson in County Laois also sold at €8,000. This one came with a successful show career to his name, having picked up the Senior Male Calf Championship at the National Calf Show in September. A son of Clenagh Lyle ET, who featured well throughout the day, and Sheehills Malificent ET, Santiago was snapped up by Keltic Stock Ltd from County Kerry. The Searson’s also parted company with Sheehills Supreme ET at €5,600, a full ET brother to Santiago. This one went west to a suckler farmer from County Clare. 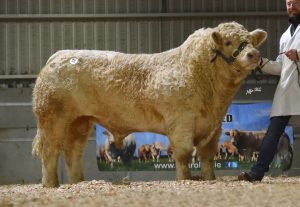 Dovea Genetics were in the market again when they acquired Clenagh Superior ET for €7,500. Exhibited by the Quin family from County Clare, Superior is a son of Domino and the CF 52 daughter, Clenagh Classic. He comes with a staggering terminal index of €182 along with a calving figure of 7.2% on beef cows, as well as one copy of both myostatin genes. 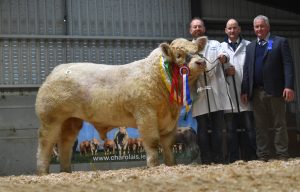 The Quin family also picked up the Overall Junior Championship with their classy young bull Clenagh2 Sultan. A son of the homebred Clenagh Lyle and a Whitecliffe James bred daughter, Sultan carries one copy of both myostatin genes. Unfortunately he failed to meet his reserve in the sales ring later in the day. The Quin’s did go on to sell their two other bull’s, Clenagh2 Spartacus ET and Clenagh2 Samurai for €5,300 and €4,200 respectively. Two full ET brothers by Domino, out off the Whitecliffe James daughter Clenagh Ocean. 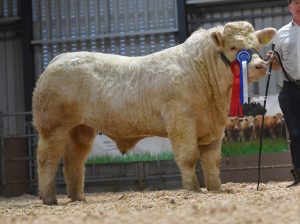 The Reserve Intermediate Champion went the way of Lisnagre Show Time ET for Jim Geoghegan from County Westmeath. This Major son goes back to the legendary Ballydownan Simone ET on the dam side, and came to sale with one copy of both myostatin genes. He was knocked down to Victor Chestnutt from Northern Ireland for a sum of €7,200. 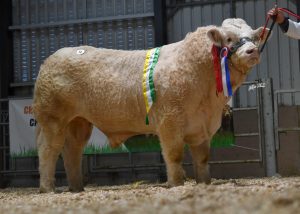 The Overall Senior Champion was awarded to Michael Kiernan’s Gallaway Superstar. A son of Lapon and a CF 52 bred dam, this Leitrim bred bull sold with a five star terminal index of €152 along with a calving figure of 6.5% on beef cows. Tom Cox dropped the hammer on this one at €6,500, destined for a suckler herd in Northern Ireland. 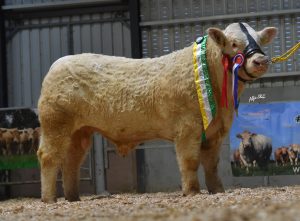 The Intermediate Champion went the way of Goldstar Sundance ET, exhibited by Martin Ryan from County Tipperary. This stylish 15 month old bull is a son of the homebred Goldstar Echo and the French bred cow Goldstar Pepite. His five star terminal index of €155, calving figure of 7% on beef cows, and one copy of the profit gene added to his overall package. He was snapped up by well known weanling producer Gerry Connellean from County Kildare at €6,400. The Ryan’s also traded their second offering Goldstar Sublime ET for a sum of €4,800. Again a full ET brother to the aforementioned Sundance. 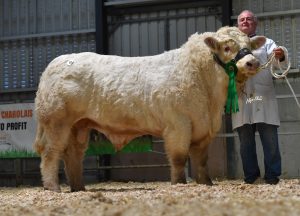 Two bulls shared the same price tag of €6,100. The first to do so was Cloughbrack Sugar Ray for Mattie Kelly from County Galway. This June 2021 born bull is a son of Pirate and a Goldstar Echo bred dam. He catalogued with an impressive replacement index value of €102 along with a calving figure of just 5% on beef cows. He sold to a suckler farmer from County Sligo. 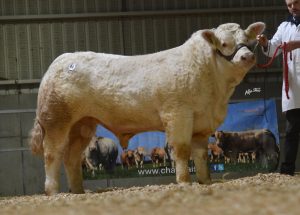 Sean Cooney from County Cavan was happy man when he sold Greenvillenua Scooby Doo for a sum of €6,100. This catchy Clenagh Lyle sired bull was just 15 months old and displayed a five star terminal index of €162. He also carries one copy of both myostatin genes. He went North to a suckler farmer from County Down.

Other leading prices on the day included:

€6,200 for Roughan Special 2 sired by Roughan Jaquard and exhibited by Pat Mc Clean from County Donegal

€6,000 for Roughan Special 3 sired by Roughan Monloulou and exhibited by Pat Mc Clean from County Donegal

€6,000 for Letteror Sportsman ET sired by Ballym Mylove and exhibited by Paul Monagle from County Donegal

€6,000 for Cattanview Superpower sired by Fiston and exhibited by Tim Higgins from County Leitrim

€5,800 for Tonyglasson Samson sired by Lisnagre Elite and exhibited by Martin Hughes from County Monaghan

€5,800 for Roughan Steve sired by Roughan Jaquard and exhibited by Pat Mc Clean from County Donegal

Earlier in the day the Society made a presentation to the former Council member and President of the Society, Kevin Maguire. At a council meeting in April of this year, at which all Council members were present, it was agreed that the Meath man should receive honorary membership from the Society for his service on Council. 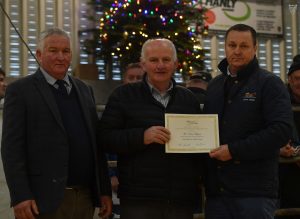 The Society would like to thank all those who purchased bulls on Saturday, as well as all those who bid on bulls. We sincerely hope their lucky ones. The next Society bull sale will take place in Tullamore on Saturday the 25th February 2023.