The Irish Charolais Cattle Society staged their first show and sale of bulls in Tuam Mart, Co. Galway on Saturday last. The sale produced a buoyant trade throughout with the small selection of Charolais bulls on offer meeting a strong demand. A clearance rate of 84% was achieved with an average of €3,290. 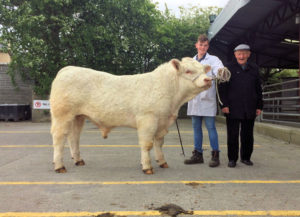 Topping the trade at €4,550 was the second last bull into the ring, Tullyvillage Mathan exhibited by William Flynn from Newbridge, Co. Galway. Just 12 months old on the day of sale, Mathan is a son of the Dovea AI sire, Cloverfield Excellent. He sold to a suckler farmer in County Clare with a five star terminal index of €144 and a below average calving figure 6.6%. 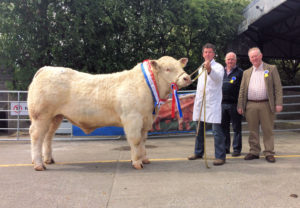 The champion bull of the day went to Whitepark Luke, a December 2015 born son of Guepard. This powerful, thick bull was brought out by Kieran Hillary from Woodlawn, Ballinasloe, Co. Galway. He was knocked down in the sales ring at €3,400 to local man Michael O’ Donohoe. The same breeder also scoped the reserve championship of the day with his second offering, Whitepark Liam. Another son of the fore mentioned Guepard and a CF 52 bred dam, this November 2015 born bull went under the hammer at €3,800, selling to another Galway man, Martin Connolly from Willamstown. 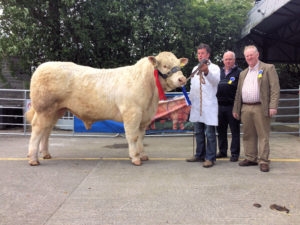 Next best in the sales ring was another yearling bull, Cloughbrach Manuel exhibited by Mattie Kelly from Newbridge, Ballinasloe, Co. Galway. Born in May 2016, Manuel is a son of Pirate and a Goldstar Echo bred dam. He sold with an impressive set of Indexes, carrying a five star terminal index of €134, a five star replacement index of €82 and a well below average calving figure of 5.8%. He was snapped up by local man, Eddie Mc Hugh at €4,050. 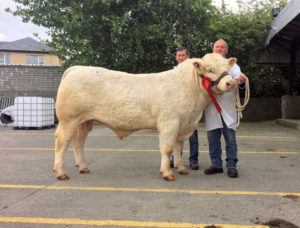 Cloughbrack Manuel who sold for €4,050 with breeders Mattie and Kevin Kelly

Hitting the €3,800 mark was the January 2016 born, Garracloon Maybe exhibited by Aidan Mc Hale from Ballina, Co. Mayo. A son of the high performance sire Blelack Digger and a Domino bred dam, this bull was one of the highest index bulls catalogued. He carries a five star terminal index of €163, a five star replacement index of €123 and a calving figure of 6.8%.

It wasn’t long until Blelack Digger was back in the action again, when Galway man Nicky Byrne received a call of €3,500 for another son of his, Perennial Laurence. This December 2015 born bull sold with a five star terminal index of €155, a five star replacement index of €105 and a calving figure of 5.8%.

Three bulls then shared a price tag of €3,000. The first of which was Cloughbrack Major by Alwent Goldbar exhibited by Mattie Kelly from Newbridge, Co. Galway. David Kenny from Ballindine Co. Mayo parted with Castlewood Matthew by CF 85 at the same money. The final call of €3,000 was received by Richard Hackett from County Clare for his 13 month old Limklin Meillard, a son of the French sire, Sesame.

The next Society show and sale takes place in Tullamore mart, Co. Offaly on Saturday the 27th of May 2017. This is the last Society sale this Spring.