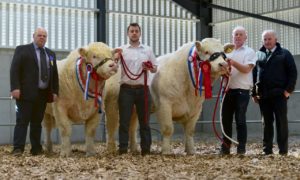 It was a day to remember for the Lisnagre and Carrowbeg herds, who done the double in the Male and Female Championships. However, the tough Weather conditions experienced in recent months really shone through on Saturday at the Premier Show and Sale in Elphin, with some Bulls meeting a tremendous trade and others failing to meet their reserve. The demand for quality Bulls was there to be seen, but concerns over fodder shortages and Cattle getting out to Grass was also clearly evident. Overall 60% of the Bulls on offer sold to an average of €4,246. The Heifers who followed the Bulls in the Sales ring met a flying trade, with 80% of those selling to an average of €3,350. The real highlight of the day came in the form of Mullawn Noble, exhibited by Austin Garvey from Drumsna, Co. Leitrim. A son of CF 52 and a Pirate bred dam, Noble caused a stir all day, catching the eye of many potential customers. Having been placed second in his class to Reserve Junior Champion, Noble went on to top the sale at €11,500. Securing this 14 month old high terminal index sire was Michael O’ Reilly from Ballinamore, Co. Leitrim. 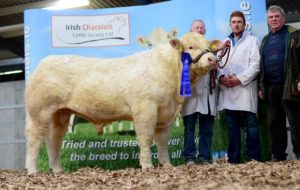 The Geoghegan family from Streamstown, Mullingar, Co. Westmeath had a wonderful day in the show ring, picking up the Senior and Junior Male Championships under Judge, Charlie Boden of the Sportsmans Herd based on the Cheshire-Derbyshire border in the UK. Securing the Senior Male Championship was Lisnagre My Hero, a son of the former Dovea AI sire, Cloverfield Excellent. Another high terminal index young bull with a index value of €160, Hero carries some of the breed’s old favorites in his mother’s pedigree, the French sires, Major and Jupiter. The 18 month old Champion would go on to sell for the day’s second highest price of €10,000. 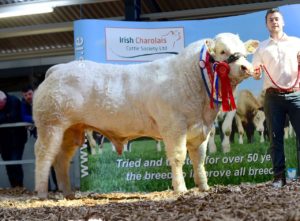 Senior Male Champion, Lisnagre My Hero, who sold for €10,000

Next best in the sales ring at €7,900 was one of the pre-sale favorites, Crossane4 Napoleon exhibited by the Mc Govern brothers from Fivemilebourne, Co. Sligo. This 14 month old son of Prime Roberto had a successful 2017 show season, picking up red rosettes in shows throughout the Country. Having been placed second in his class in the pre-sale show, Napoleon was snapped up in the sales ring by Paddy Holian from County Galway. 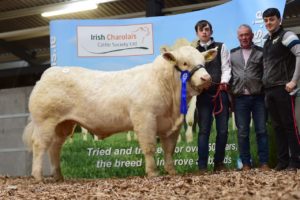 The Junior Male Champion, Lisnagre Nero ET exhibted by the Geoghegan family then went under the hammer at €7,000. A son of the French sire, Jupiter, Nero descends of the same line of cows as the Senior Champion, the great Ballydownan Simone being the focal point. Just 14 months old on the day of sale, this bull sold with a four star terminal index of €116. He will now join the herd of J.A.W Rees based in Llangurig, Wales. 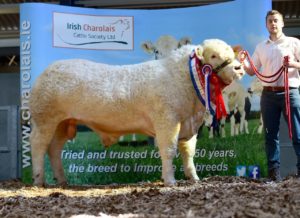 Hitting the €6,300 mark was Conal Tiernan’s, Coshleens Nathan. A 14 month old son of Pirate and a Cavelands Fenian bred dam, Nathan sold with one of the best set of indexes in the Catalogue. He carries a Replacement index of €107, a Terminal index of €146 and a calving figure of 6.5%. Wrapping this one up was local man, John Clancy from Elphin in County Roscommon. 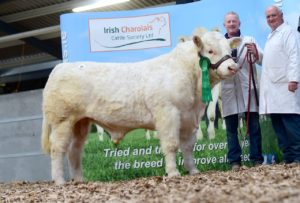 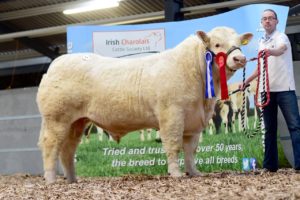 Matt and PJ Ryan from Borrisoleigh, Co. Tipperary had a productive day in the sales ring, trading their two bulls at €6,000 and €5,000, respectively. Their first offering into the ring was the second prize winning, Kilvilcorris Montana. A son of CF 52 and a Pirate bred dam, this bull possessed a recipe for success. As well as having a proud pedigree, the 17 month old Montana also looked the part, attracting many viewers, before romping his way to €6,000, selling to James Cogan from Riverstown. His stablemate, Kilvilcorris Major followed closely behind, selling shortly afterwards at €5,000 to Frank Gilmartin from Lavagh, Co. Sligo. Another son of the fore mentioned, CF 52, this 16 month old bull carries a Terminal index of €158 and a calving figure of 7.6%. 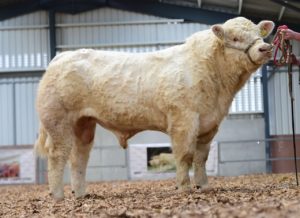 Kilvilcorris Montana who sold for €6,000

Local man Tommy Gormley from just outside Elphin traded his young bull, Carrowkeel08 Mervin at €5,000. A son of the renowned UK sire, Blelack Digger, Mervin carries a five star terminal index of €145, a five star Replacement index of €128 and a calving figure of 7.7%. After some lively bidding, this young bull was knocked down to Catherine Mc Donnell from Charlestown. 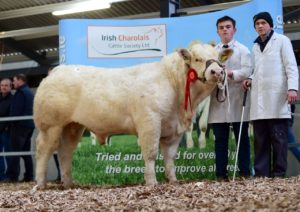 Martin Herity from County Sligo received a call of €4,500 for his stylish young bull, Coolembley Magic. A son of the former Dovea AI sire, Prime Roberto, Magic sold with a five star Terminal index of €153. Once again, CF 52 was behind the dam of this 15 month old bull. Buyer here was Owain Llyr from Ruthin, Wales. The Welsh man would go on to purchase five Bulls in total. Islandview Nico ET, a son of the French sire, Tombapik, was next best at €4,350. Exhibited by Tommy Mc Laughlin from Malin in County Donegal, Nico sold with an impressive set of indexes, comprising of a Terminal index of €162, a Replacement index of €117 and a calving figure of 7.1%.

Other leading prices in the Bulls included:

€3,800 for Clewbay12 Nero sired by Gedeon, exhibited by Charles Hughes from County Mayo 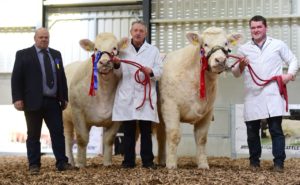 Topping the female trade at €5,500 was the Female Champion of the show, Carrowbeg Magic 2, exhibited by Michael Graham from Boyle in County Roscommon. The rising two year old is a daughter of the ever consistent, Prime Roberto and a Bova Sylvain bred dam. She sold in calf to the popular Pirate and will now take up residence with the Bostonia herd in County Sligo. 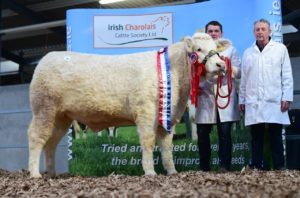 The Father and son duo, Michael and Kevin Graham capped of a wonderful day, as they went on to clinch the Reserve Female Champion with their second offering, Carrowbeg Magic 3. This 17 month old daughter of the well known NCBC sire, Fiston, carries a five star Replacement index of €82. She was knocked down at €3,700 to fellow breeders, Sal and Desmond Boyd from Carrick-on-Shannon. 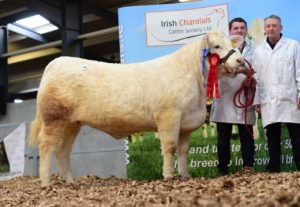 The Quin family from Newmarket-on-fergus in County Clare parted ways with Clenagh Lola 2 ET for €4,300. This powerful, 30 month old Heifer sold in-calf to the Eurogene AI sire, Whitecliffe James. Lola who is a daughter of Texan gie, will now join the Crossane4 herd, owned by the Mc Govern bothers in County Sligo. 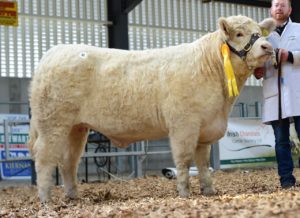 Tawny Meeney Miney Moo exhibited by Ciaran Daly from County Leitrim realized a bid of €4,200. A May 2016 born daughter of Blelack Digger, this Heifer sold with a five star Replacement index of €93. Securing this one was Terence Boyle from County Leitrim. Jerry O’ Keeffe from Knocklong in County Limerick seen his rising two year old Heifer, Grangwood Mistress sell for €4,000. A daughter of the French sire, Heracles M, Mistress headed North with Michael Tumelty from Downpatrick. The Sugrue family from County Kilkenny traded their two and a half year old Heifer, Kilbline 1 Lavender for €3,600. This in-calf Pirate daughter, who carries a five star Replacement index of €69, was secured by Michael Mullen from Roundstone.

The next Society show and sale will take place in Tullamore Mart, County Offaly on Saturday the 21st of April 2018, with 100 Bulls on offer