It’s not too often the National Charolais Show Champion comes from the same County two year’s running. Last Sunday, Drumshane Mademoiselle exhibited by the Feeney brothers from Enniscrone, Co. Sligo retained the title for County Sligo, following in the footsteps of Sagesse Martha who secured the accolade last year for Brendan and Niall Canning from Rosses Point. Mademoiselle has had an astonishing year in the show ring for the Bostonia herd, claiming the Charolais Championship in Balmoral in May and continuing her success throughout the year, picking up numerous breed and interbreed championships across the Country. The only Charolais to stand in front of the outstanding two and a half year old this year, is her stable mate, Bessiebelle Millie ET. A daughter of Inverlochy Gurkha, Mademoiselle was bred by the Know family in Essex, before being purchased by the Feeney’s, who have enjoyed remarkable success with her since. 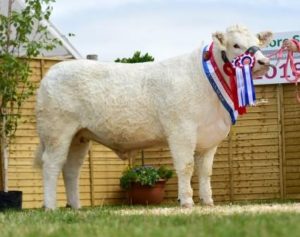 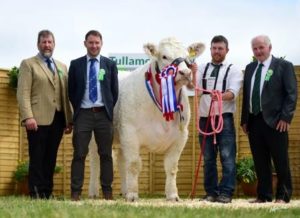 Standing reserve to the fabulous Mademoiselle was the September 2017 born, Brocca Napoleon ET exhibited by John Barry Maran from Fardrum, Athlone, Co. Westmeath. This stylish son of Texan gie and a Jupiter bred dam has been in fine form this Summer, picking up red rosettes around the Country, as well as winning the Interbreed Calf Championship in Ossory Show a few week’s back. John Mc Gregor from the Allanfauld herd in Scotland made no hesitation in awarding the Senior Male Calf Championship to Napoleon, before himself and Female Judge, Ian Miller, tapped him out as the Reserve Overall Charolais Champion. 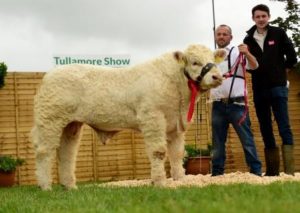 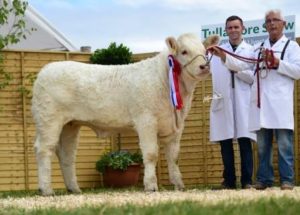 Exhibited by John Mc Elchar from Ballylast, Lifford, Co. Donegal, the October 2017 born Ballylast Nula ET was awarded the Senior Female Champion by Ian Miller, who was accompanied by a young shadow judge from France, Guillaume Colmont. A daughter of Thrunton Voldermont and a Major bred dam, this well grown heifer fought of stiff competition earlier in the day before clinching top spot in her section. 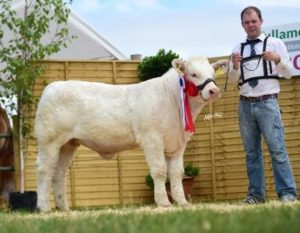 In the Junior Female section, Corney Orlando ET exhibited by David Magee from County Cavan stood top of the line. This 8 month old heifer is a daughter of Major and the renowned French cow, Egypte. 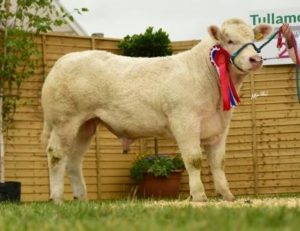 Claiming the Junior Male Calf Championship was Bonnavella Owen, exhibited by Martin Killeen from Mullagh, Co. Clare. Born in January 2018, this young bull is a son of Fiston and a Thrunton Bonjovi bred dam. 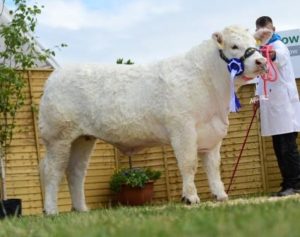 The Feeney brothers from Enniscrone, Co. Sligo also wrapped up the Reserve Senior Championship with Bessiebelle Millie ET, a two year old daughter of Newhouse Bigal. Millie has wracked up a number of breed championships for Bostonia this Summer, on some occasions standing ahead of her herd mate Mademoiselle. 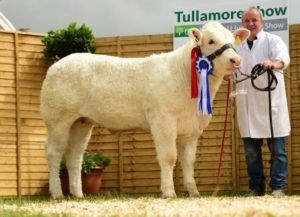 Exhibited by Aidan Mc Hale from Ballina, Co. Mayo, Garracloon Nessa picked up the Reserve Junior Female Championship under the watchful eye of Ian Miller. Sired by the Eurogene AI sire Whitecliffe James, Nessa is a September 2017 born heifer who has also lit up the summers shows in the west this year. 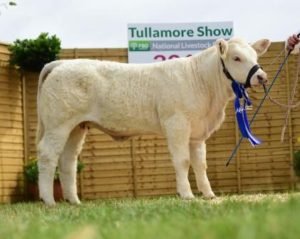 The Reserve Junior Female Calf Champion came in the form of Williamstown Oprah exhibited by Aidan Farrell from Moate, Co. Westmeath. A daughter of Major and a Excellent bred dam, Oprah is a January 2018 born heifer who was on one of her first outing’s this Summer. 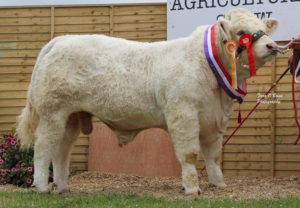 The Bostonia herd was back at the top once again, when their September 2017 born bull, Bostonia Nonstopabull, was awarded the Reserve Senior Male Calf Championship. This Davally illusion son has enjoyed a bright show career this Summer, being unbeaten in his class until last Sunday. 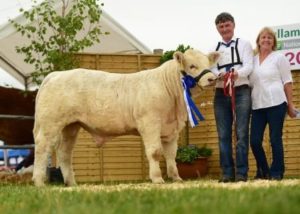 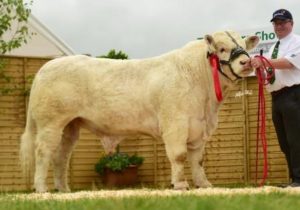 Taking the first class of bulls was Goldstar Nelson, exhibited by Martin Ryan and family from Cabra, Thurles, Co. Tipperary. A son of the home bred Goldstar Echo and Goldstar Jonquille, Nelson is a January 2017 born bull that caught the eye of Mc Gregor, who was accompanied by young french breeder, Thomas Samyn, a shadow judge for day. 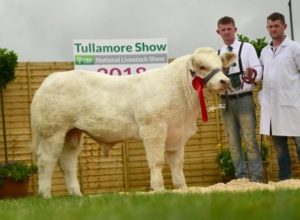 Standing top of the line in the next class of bulls was the Egan brothers from Ballina, Co. Mayo, with Cloonglasna11 Noddy ET. Born in October 2017, this Major son out of a Domino bred dam has been a regular prize winner on the show circuit in the west of Ireland this Summer. Standing second to Noddy was his full brother, Garracloon Noel 2 ET exhibited by fellow Mayo breeder, Aidan Mc Hale. 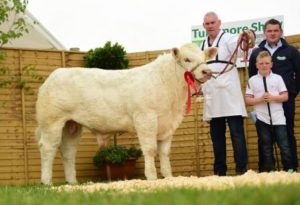 Michael Kiernan from Carrigallen, Co. Leitrim stepped out with the red rosette in the November class of bulls with Gallaway Nice Boy ET. This well made bull is a son of CF 52 and a Bova Sylvain bred dam, who is well acquainted to red ribbons, after winning the Charolais Championship in Oldcastle Show earlier this year. 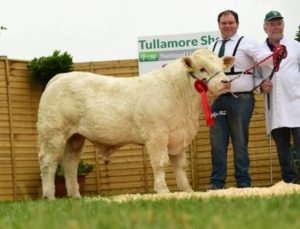 Securing the December class of bulls was Firoda Nidge, a son of the NCBC sire, Firoda Jason and a Lisnagre Elite bred dam. Nidge was bred and exhibited by Seamus Nolan from Castlecomer, Co. Kilkenny. 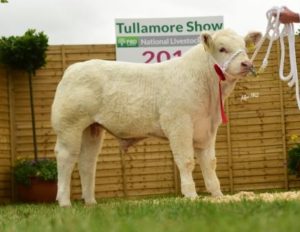 The February 2018 born Bostonia Overlord claimed the next class of Junior bulls for the Feeney brothers from Enniscrone. Overlord is one of the first calves of the 25,000 gns Gretnahouse Lord to hit the show ring and done so in fine fashion.

The last class of young bulls was awarded to Cassina Orlando, a son of the home bred Cassina Lance. Exhibited by Martin Clyne from County Longford, this March 2018 born calf is a son of a CF 52 bred dam. 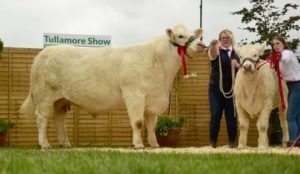 The first class of females went to the prolific show cow Goldstar Falkland with her heifer calf at foot. Exhibited by Martin Ryan and family from Cabra, Thurles, Co. Tipperary, the french bred Falkland has been an iconic figure in the show ring over the years, with many championship accolades to her name. 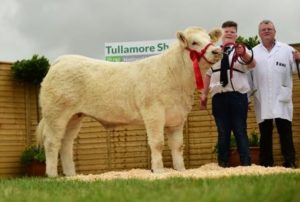 The April 2017 born Faus Nevada brought success in the next class of females for Desmond Boyd from Carrick-on-Shannon, Co. Leitrim. This stylish daughter of Liscally Eti has enjoyed the limelight already this year, winning the Charolais Championship in Mullingar. 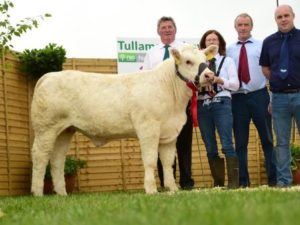 The December 2017 born Drumcullen Nollaig was Ian Miller’s pick in the next class. Exhibited by the Fleury’s from Killyon, Birr, Co. Offaly, Nollaig is a daughter of the home bred bull, Drumcullen JJ. 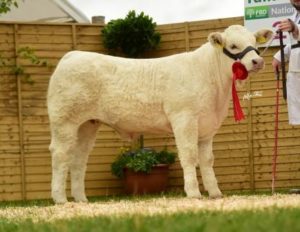 Another bright spark from this year’s summer shows stole the show in the next class, in the form of Drimina Oreo. Exhibited by John and Graham Gallagher from Tubbercurry, Co. Sligo, Oreo is a February 2018 born daughter of the Dovea AI sire, Killimor in time. 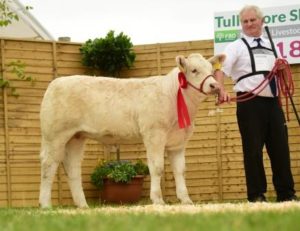 County Clare breeder Kenneth Clarke from Ardnacrusha notched up the last class of the day with debutante, Ballyfinnane Oprah. This April 2018 born heifer is a daughter of the UK sire, Alwent Goldbar and Cottage Fleur. 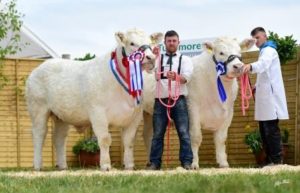 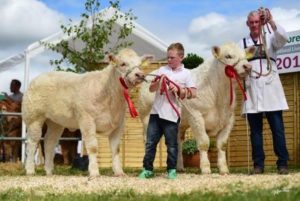 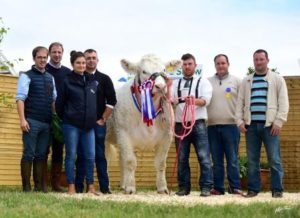