Last Saturday, Tullamore Mart played host to a larger than normal show of Charolais bulls, resulting in what could only be described as a buyer’s market on the day. Overall, 42 bulls traded hands at an average price of €3,100. It must be noted that the number of bulls sold was only slightly down on the same sale last year, which was a flying trade, a sign of the number of bulls offered for sale on Saturday. Topping the trade at €6,400 was Lisnagre Natural ET for County Westmeath breeder, Jim Geoghegan. This June 2017 born son of Pirate and a Major bred dam is a full brother to the €13,500, Lisnagre Jasper. Boasting a five star terminal index of €146 and a calving figure of 7.1%, Natural was snapped up outside the sales ring by Padraig Bollard from Rochfortbridge. Commenting on his purchase Padraig explained, “I have had a number of Lisnagre bulls in the past who have bred exceptionally well for me, and I have been watching this bull all year”. 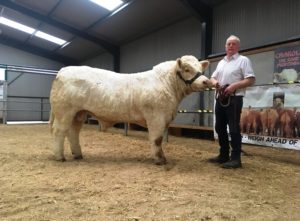 Lisnagre Natural ET who sold for the top price of €6,400

Next best in the sales ring at €4,500 was Knockmoyle10 Nelson, a son of the popular NCBC sire, Fiston. Bred and exhibited by Gerry Lynch from Tulla, Co. Clare, Nelson is a descendant of the herd’s prolific breeding cow, Ashleigh Cleo. Having picked up a red rosette in the pre-sale show, he also sold with a massive five star terminal index of €181. Wrapping this one up was Mervyn Payne from County Kildare.

Receiving a call of €4,100 was Feakle Niall exhibited by Michael Green from County Clare. A July 2017 born son of the legendary CF 52 and a Pirate bred dam, Niall combined looks and figures, carrying a five star terminal index of €142. He went northwards with David Boal from County Donegal.

Securing the Senior Champion in the pre-sale show was William and Niall Flynn from Newbridge, Co. Galway with Tullyvillage Narcos. This 18 months old bull is another son of Fiston and a Utrillo-Bp bred dam. The Champion entered the sales ring with a five star terminal index of €130, a five star replacement index of €85 and a calving figure of just 5.3%. He was knocked down at €4,000 to local Tullamore man, Thomas Finnamore. 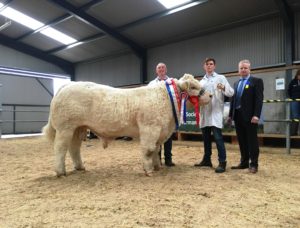 Judge, Nigel Matchett from Portadown found his Reserve Senior Champion in the form of Corney Niall exhibited by David Magee from County Cavan. This June 2017 born bull who is a son of Goldstar Echo and a Padirac bred dam, was snapped up at €3,100 by John Barrett from County Galway. 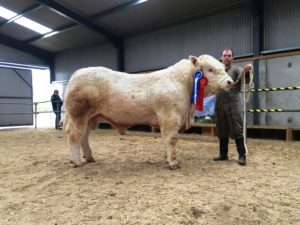 County Tipperary breeders, Matt and PJ Ryan had a successful day in the sales ring, parting ways with their two offerings at €3,800 and €3,700, respectively. First up at €3,800 was Kilvilcorris Noble, a son of Goldstar Echo and a Oscar bred dam. This March 2017 born bull who carried a five star terminal index of €131 and a calving figure of 7.9%, will now join Vincent Behan in County Waterford. Then at €3,700 was the 13 month old, Kilvilcorris Ned 2, a son of CF 52 and a Indurain bred dam. Once again, this bull possessed a five star terminal index of €165 and an attractive calving figure of just 6.1%. He will now take up residence with County Clare farmer, Tony Burns.

Jarleth and Charlene Tracey from Tuam, County Galway traded their 15 month old bull, Claregal Narth for a sum of €3,700. One of the highest index bulls in the catalogue, Narth sold with a five star terminal index of €150, a five star replacement index of €89 and a calving figure of 7.5%. A son of Thrunton Bonjovi and a Blelack Digger bred dam, Auctioneer Tom Cox dropped this one to Patrick Lucey from County Cork.

Thomas Keane from Westport in County Mayo received a total of €7,350 for his twin bulls, Cuillmore Nathan and Noel 2. Sons of Fiston and a Cottage Devon bred dam, these July 2017 born bulls sold with identical indexes, consisting of a five star terminal index of €139 and a calving figure of 8.8%. First into the ring was Nathan who sold to Albert Hardy from County Offaly for €3,600, with his sibling, Noel 2 following directly after at €3,750, selling to Tom Kilcooley from County Galway.

Up next at €3,650 was a full brother to the Dovea AI sire, Pottlereagh Mark. Exhibited by the Hughes family from County Monaghan, this July 2017 born bull sold with a perfect set of indexes, consisting of a five star terminal index of €150, a five star replacement index of €114 and a calving figure of just 5.6%. Securing this attractive offering was Padraic Ryan from County Sligo.

The Junior Champion of the show was awarded to John Fleury from Killyon, Co. Offaly with Drumcullen Nevada 2, a stylish son of Lyonsdemesne Pat and a Prime Roberto bred dam. In reserve was Glenree Noah ET exhibited by John O’ Grady from Glenamaddy, Co. Galway. This 14 month old bull is a son of Nelson and once again a Prime Roberto bred dam. Both the Junior and Reserve Junior Champion failed to meet their reserve and left the sales ring unsold. 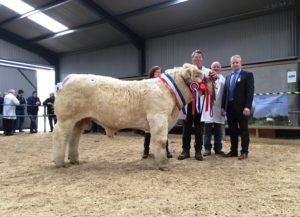 €3,300 for Elfeet Noel sired by Tombapik and exhibited by Sal Boyd from County Roscommon

€3,300 for Abbeymore Neymar sired by Fiston and exhibited by James Foudy from County Clare

€3,250 for Kilgeever Noah sired by Fiston and exhibited by Willam Scanlon from County Mayo

€3,200 for Ballyconboy Nipper sired by Drumcullen JJ and exhibited by John Connor from County Roscommon

€3,200 for Western Natural sired by Fiston and exhibited by Joe Clancy from County Galway

€3,000 for Windmill Nijinsky sired by Blelack Digger and exhibited by Richard Nerney from County Roscommon

€3,000 for Drumcullen Newton sired by Drumcullen JJ and exhibited by John Fleury from County Offaly

€3,000 for Bostonia Nelson 2 sired by Thrunton Bonjovi and exhibited by Brendan Feeney from County Sligo

€3,000 for Pottlereagh Nicolas sired by CF 52 and exhibited by Elizabeth Hughes from County Cavan

Next Society Show & Sale is the Elite Heifer Sale on Saturday 10th November in Tullamore Mart with 85 Heifers cataloged. The Christmas Cracker Sale will then take place in Elphin Mart on Saturday 1st December with 101 Bulls cataloged