Tullamore Mart played host to another large Show & Sale of Charolais bulls last Saturday, which resulted in an overall solid trade right throughout. Over 70 Charolais bulls went under Tom Cox’s hammer, with 70% of them selling to average €3,298. Southern Ireland suckler farmers were out in force to secure quality bulls, with two heading across the Irish Sea to Wales and Scotland, and two selling to Northern Ireland. Topping the trade at €5,700 was Kilvilcorris Noah exhibited by Matt and PJ Ryan from Borrisoleigh, Thurles, Co. Tipperary. This Goldstar Echo son off an Excellent bred dam sold with a calving figure of just 6.6%, well below the breed average of 6.95%. Born in December 2017, Noah stood second in his class in the pre-sale show before going on to sell to Vincent Dolan from Mullingar later in the day. The Ryan’s went on to have a wonderful day in the Sales ring, selling their three offering’s for a total sum of €13,100. Kilvilcorris Orson, a son of CF 52 and a Pirate bred dam realized €3,800, with Kilvilcorris Otis hitting the €3,600 mark to wrap up a fine day’s trading for the Tipperary men. Both Orson and Otis were born in January 2018 and carried five star terminal indexes.

Judge for the day, Darragh Mc Manus, tapped forward Berrymount Norman exhibited by William Foster from County Cavan as his Overall Senior champion. Norman backed up his judgement in the Sales ring, when he went on to sell for the day’s joint second highest price of €5,100. A son of Pirate and a Major bred dam, this bull was born in November 2017 and carried a calving figure of just 6.5%. Securing the Cavan bred Bull was Northern Ireland Suckler farmer, Patrick Mc Garvey from County Tyrone. 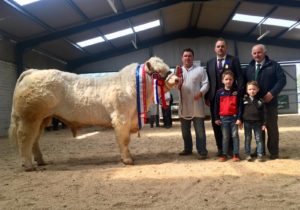 Sharing the same price tag of €5,100 was the second prize winner, Bonnavella Owen exhibited by Martin Killeen from Mullagh, Co. Clare. This bull was awarded the Junior Male Calf Championship at last year’s National Charolais Show in Tullamore. Sired by the well known NCBC sire, Fiston, Owen carried one of the best set of indexes in the Catalogue, with a five star terminal and replacement index, accompanied by a calving figure of 7.6%. He will now reside with suckler farmer, Charles Fenton from County Wicklow.

Taking the Overall Junior Champion of the day was Parkearagh Oisin, exhibited by Oliver Mason from Tralee in County Kerry. This catchy son of the Dovea AI sire, Inverlochy Ferdie, fought off stiff competition in the show ring before going on to sell for €3,200. 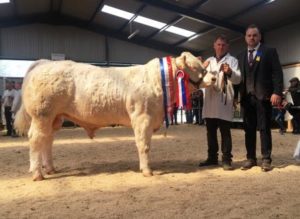 Three bulls then received a call of €5,000, the first being Lisnagre Nobber ET, exhibited by Jim Geoghegan from Streamstown, Mullingar, Co. Westmeath. This September 2017 born bull is a son of Pirate and a Major bred dam, and a carried a five star terminal index of €148, along with a calving figure of just 7%. Williamstown New Kid ET was the next bull to hit €5,000. Exhibited by Aidan Farrell from Moate, Co. Westmeath, New Kid is a November 2017 born son of Major and a Excellent bred dam. This bull carries a five star terminal index of €141 and a calving figure of 6.7%. Also trading at €5,000 was the first prize winner, Terryville Nelson exhibited by Patsy Lynch from Lifford, Co. Donegal. This stylish 16 month old bull is a son of Cavelands Fenian and a Crossmolina Euro bred dam. After some lively bidding this five star terminal index bull was knocked down to the Society President, Kevin Maguire from County Meath. 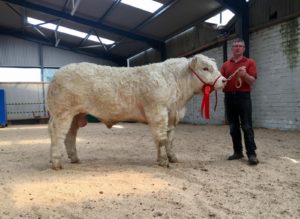 Aidan Farrell was back in the money once again when he traded Williamstown Nigel ET for €4,300. This November 2017 born bull is a son of CF 52 and a Pirate bred dam. He displayed a decorative set of indexes which included a five star terminal and replacement index, accompanied by a well below average calving figure of 5.7%. Not far behind at €4,200 was Jim Geoghegan from Streamstown, Mullingar, Co. Westmeath with Lisnagre Oliver. This 15 month old son of the home bred, Lisnagre Lad and a Cloverfield Excellent bred dam, possessed one of the highest terminal indexes in the catalogue of €173.

The Quinn’s from Edenderry in County Offaly had productive day in the sales ring, selling their four bulls for an average of €3,575. Best for them at €4,000 was Ballym Notorious and Ballym No.1. Notorious is a son of the herd’s stock bull, Ballym Louis Xiv and No.1 is a son of the ever consistent, Goldstar Echo. Both bulls were born in November 2017.

Martin Ryan from Thurles in County Tipperary realized €3,900 for his December 2017 born bull, Goldstar Nutella ET. A son of Pirate and a Jupiter bred dam, this bull carried a five star terminal index of €140. Drumcrow Omer exhibited by David Abbott from County Cavan was next best at €3,800. A son of the high performance, Blelack Digger, Omer displayed one of the best array of indexes in the catalogue, with a five star terminal index of €151, a five star replacement index of €105 and a calving figure of 7.2%. This 14 month old bull was secured by John O Sullivan from County Laois.

Richard Murphy made the long journey from Banteer in County Cork worthwhile when he parted company with Lyre Neptune at €3,700. Another son of the prominent, Goldstar Echo, this October 2017 born bull was made all the more attractive with a calving figure of just 5.85% and sold to a suckler farmer in County Galway.

The Reserve Senior Champion was awarded to Tullyvillage Netherville exhibited by William Flynn from Newbridge, Ballinasloe, Co. Galway. This powerful son of Crossmolina Euro and a Utrillo Bp bred dam carried a five star terminal index and was knocked down at €3,400. 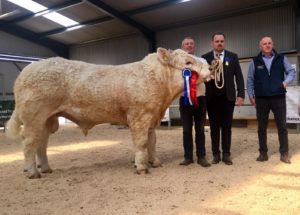 Taking the Reserve Junior Champion was one of the youngest bulls on the day, Carrowquill Ollie exhibited by Dermott Foley from Kilmore in County Roscommon. This 12 month old bull is sired by the upcoming Dovea AI sire, Pottlereagh Mark. This one carries a five star terminal and replacement index, boosted by an attractive calving figure of just 6%. He went on to sell for €3,100 to a County Galway suckler farmer. 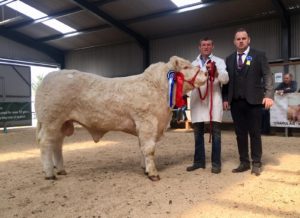 €3,600 for Williamstown Nicholas ET sired by Pirate and exhibited by Aidan Farrell from Moate, Co. Westmeath

€3,500 for Rooskeynamona Nicholas ET sired by Major and exhibited by Gerard Mulligan from Mohill, Co. Leitrim

€3,500 for Dereskit Nugget 932 ET sired by Uni and exhibited by Basil Bothwell from Killeshandra, Co. Cavan

€3,400 for Knockmoyle10 Nemo sired by Cavelands Fenian and exhibited by Gerard Lynch from Ennis, Co. Clare

The next Society Show & Sale takes place in Tuam Mart, County Galway on Saturday the 4th May