On Saturday last, Tuam Mart played host to the Irish Charolais Cattle Society’s annual Show and Sale of Charolais Bulls. The Sale provided a brisk and lively trade, with suckler farmers out in force to secure quality bulls for the upcoming breeding season. Overall 87% of the Bulls on offer sold to an average of €3,022. Topping the day’s trade at €4,350 was the first prize winner from the pre-sale show, Landleague Nixon ET, exhibited by Francis Ryan from Rosscahill, Co. Galway. This powerful October 2017 born bull is a son of CF 52 and a Baurnafea Baccarat bred dam. He sold with a five star terminal index of €156 and a calving figure of 9.6%. 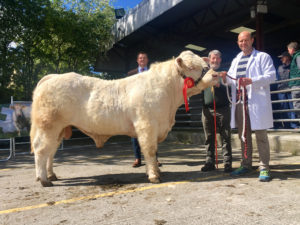 Not far behind at €4,000 was the first prize winner from the second class, Coshleens Ollie, exhibited by Conal Tiernan from Elphin, Co. Roscommon. This stylish son of Goldstar Echo and a Cavelands Fenian bred dam carries a 4 star terminal index of €126, a five star replacement index of €81 and a below average calving figure of 6.6%. 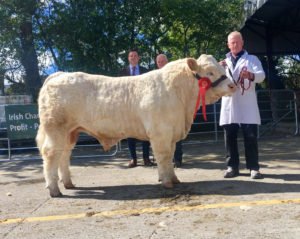 Two bulls then traded at €3,600. The first to do so was the day’s Overall Champion, Kilvilcorris Owen, exhibited by Matt and PJ Ryan from Thurles, Co. Tipperary. A classy son of the French sire, Glasgow, Owen carries a four star terminal index of €115 and a four star replacement index of €69. Also selling at €3,600 was Dereskit Obama exhibited by Basil Bothwell from Killeshandra, Co. Cavan. This 16 month old Alwent Goldbar son displayed a decorative set of indexes which included a five star terminal and replacement index. 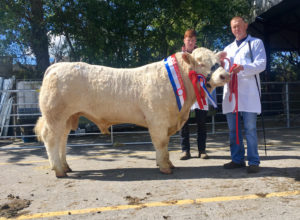 Next best at €3,450 was Sliabhbawn Ollie exhibited by County Roscommon man, James Duke. A son of Roughan Lincoln and an Indurain bred dam, Ollie went under Tom Cox’s hammer with a boastful set of indexes and a below average calving figure of 6.4%. Judge for the day, Seamus Nagle, found his Reserve Champion in the form of Cloughbrack Oaktree exhibited by Mattie Kelly from Newbridge, Co. Galway. This 14 month old bull is a son of Sylvaner and a Grimaldi bred dam. He was knocked down in the sales ring at €3,300. 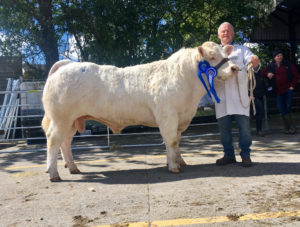 Two bulls exchanged hands at €3,250, Perennial Nama exhibited by Ncky Byrne from Oughterard, Co. Galway and Knockinroe16 Oisin exhibited by Declan Bourke from Templemore, Co. Tipperary. Nama is a son of Cavelands Fenian and a Oscar bred dam, who carries a calving figure of 6.8%. The Tipperary bred bull, Knockinroe16 Oisin is a son of the french sire, Bourgogne, who displayed a wonderful array of indexes, which included a five star terminal and replacement index accompanied by a calving figure of just 6%.

The Irish Charolais Cattle Society will hold their final sale this Spring on Saturday the 25th May in Tullamore Mart, Co.Offaly, with 80 Bulls cataloged