Caylers Napoleon, a son of the Irish bred, Rosanna Jupiter, sold for the top price of 12,000 gns at this week’s sale in Carlisle for the Barker family in Hertfordshire. Napoleon was also awarded the reserve supreme, reserve male and reserve intermediate champion on the day. The 17 month-old Napoleon who was knocked down at 12,000 gns in a two way share between John & Raymond Irvine, Ballindalloch, Aberdeenshire and Jim Muirhead, Arbroath, Angus. The Barker family also sold another son of Jupiter at 6,000 gns, Caylers Oscar. One of the sales younger lots, Oscar is a January 2018 born bull and was snapped up by Messrs Edmondson, Kirkby-in-Furness, Cumbria. 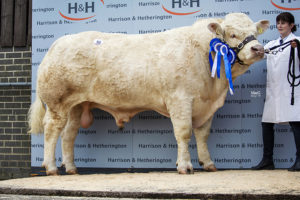 A son of the home bred Rosanna Fameux, Jupiter was bred by Pat Stephens who runs a 30 cow Pedigree Charolais herd in County Carlow. Since his departure in 2015, Jupiter has brought wonderful success to the Caylers herd, breeding the Reserve Intermediate Champion in Carlisle and second top priced bull in Welshpool last year, as well as many other high priced bulls.