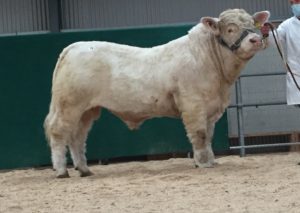 Fieldview Pat who sold for the top price of €7,500

Despite the all the restrictions and guidelines in place at present, Charolais bulls met a wonderful trade in Tullamore on Saturday last. There were many risk factors heading into the sale, with all bidding online and no customers allowed around the sales ring. However, it was clear from the outset that there was a great demand for Charolais bulls, with over 100 buyers registered for viewing on the morning. It was also positive to hear reports of many bulls selling on farms prior to the sale. Overall, 76% of the bulls forward sold to an average of €3,720, up nearly €700 on last year. Topping the trade at €7,500 was the 14 month old Fieldview Pat, bred by David Erskine from County Monaghan. A son of the easy calving French sire Chic, and an Ashleigh Admiral bred dam, Pat catalogued with a five star terminal and replacement index, along with a calving figure of just 4.4% on cows. 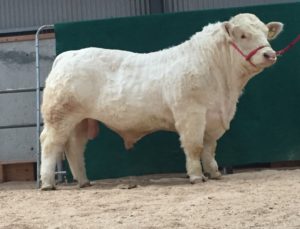 Not far behind was Dalehill Pavlov at €7,000. Another 14 month old bull, this young sire was exhibited by Basil and Victoria Kells from County Cavan. A son of Fiston and Lyonsdemesne Tzar bred dam, Pavlov carries a five star terminal index of €139 and a calving figure of just 4.8% on cows. Like the sale topper Fieldview Pat, Pavlov carries one copy of the Q204X Myostatin gene. 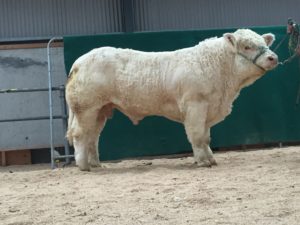 Earlier that day, the 19 month old Inish Pogba went under Tom Cox’s hammer at €6,600. Exhibited by Louis Mc Gonagle from County Donegal, Pogba is a heavy terminal hitter, with Cloverfield Excellent, Clonoulty Andraemon and Doonally New in his pedigree. He carries a massive five star terminal index of €165 and a calving figure of 7.9%. He was one of the few bulls in the catalogue to carry two copies of the F94L gene. 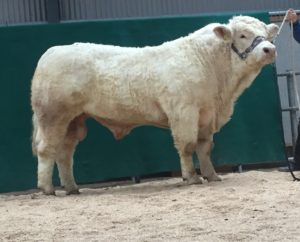 Ballynabreen Pogba who sold for €6,300

Up next was another Pogba, and once again a Donegal bred bull, Ballynabreen Pogba, exhibited by John and Kevin Mc Dermott from Innishowen. A son of the French sire Hatenon and Castlewood Ivy, this powerful 20 month old bull went for sale with a proven cow line, which included Major/Merveille. He sold with a five star terminal index of €139 and a calving figure of 9.8%. 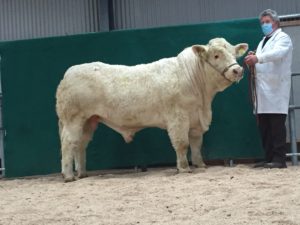 Two Drumcullen bulls then breached €6,000 for John Fleury from Killyon in County Offaly. First into the ring was Drumcullen President, who sold for €6,000. A son of Tonroe Eminem, this July 2019 born bull sold with a whopping terminal index of €179 and a calving figure of 5.3%. His stablemate Drumcullen Podge, then went one better, selling for €6,200. Another high index young bull, this 15 month old Whitecliffe James son, who is out of a Vexour Granville bred dam, carries one copy of the F94L gene.

A young bull who attracted lots of attention all morning was the 13 month old Tullyharnet Pablo. Exhibited by Noel Laverty from County Monaghan, this Cavelands Fenian son catalogued with a three star terminal index of €104, a three star replacement index of €68 and a calving figure of 9%. Short on stars, but quality in abundance, Pablo exchanged hands at €5,100. A Cavan breeder went home content when he traded his bull for €4,700. Martin Hughes from Cootehill offered Pottlereagh Prince for sale with a boastful five star replacement index of €146, a five star terminal index of €137 and a calving figure of 4.5%. Prince is another son of the easy calving AI sire Cavelands Fenian.

Yambo Pedro sired by Fiston and exhibited by Michael Oates from County Roscommon who sold for €4,500

Makief Peter sired by Fiston and exhibited by Derek Woods from County Cavan who sold for €4,500

Landleague Phoenix sired by Inverlochy Ferdie and exhibited by Francis Ryan from County Galway who sold for €4,400

Gallaway Paulo sired by Bivouac and exhibited by Michael Kiernan from County Leitrim who sold for €4,400

Williamstown Prince sired by Tinnegarney Nantes and exhibited by Aidan Farrell from County Westmeath who sold for €4,300

Cornadrung Pearse sired by Cavelands Fenian and exhibited by Thomas and Karl Farrell from County Longford who sold for €4,200

Kilvilcorris Peader sired by Fiston and exhibited by Matt Ryan from County Tipperary who sold for €4,200

Kilvilcorris Paschal sired by Bunratty Mike Tyson and exhibited by Matt Ryan from County Tipperary who sold for €4,100

The Society would like to thank Tullamore Mart, our breeders, and of course our customers for adhering to the guidelines in place on Saturday. The next Society Sale is the Elite Charolais Heifer Sale which will take place in Tullamore Mart, this Saturday the 14th November. Download the PDF Catalogue here – Elite Heifer Sale Catalogue Nov 20