This years Christmas Cracker bull sale in Elphin Mart took place under surreal circumstances. Due to the restrictions in place, there was no pre-sale show, a spectacle which always drew large crowds from at home and abroad. Instead, there was an extended viewing period for buyers to examine the bulls on the morning of the Sale. A limited number of buyers were allowed back around the ringside for the sale itself, in conjunction with online bidding. The sale got off to a flying start, with a vibrant trade for the older lots. The trade did level out as the sale went on, largely due to the high volume of bulls catalogued for sale on the day. However, the sale will be remembered as a positive one for Charolais and a good finish to a terrific year for the breed in Ireland. 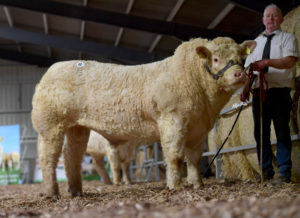 Leading the trade at €16,600 was the 14 month old Lisnagre Peder, a son of Pirate and the Jupiter bred daughter, Lisnagre Linda Et, who goes back to herd’s successful Ballydownan line. Bred and exhibited by Jim Geoghegan from County Westmeath, this powerful young bull sold with a five star terminal index and carries one copy of the Q204X and F94L myostatin genes. After a tough bidding contest, Claire Ferris from County Down secured the highly sought after Peder. This is the highest priced paid for a Charolais bull at the Christmas Cracker since it’s move to Elphin in 2015. 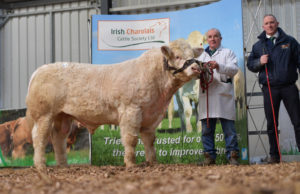 Selling at €9,600 was Garracloon Phil ET, exhibited by Aiden Mc Hale from Ballina, County Mayo. Another son of the great Pirate and the homebred Garracloon Caramel, who goes back to Domino and CF 52. He sold with a massive five star terminal index of €174 and once again carries one copy of the Q204X and F94L myostatin genes. Wrapping this 15 month old bull up was a suckler farmer from County Tyrone. 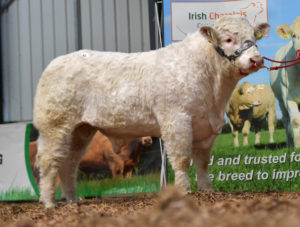 Flor Mc Carthy travelled all the way from Kenmare in County Kerry to secure Bostonia Pretty Boy ET for a sum of €9,250. A son of Newhouse Bigal and a CF 52 bred dam, Pretty Boy was bred and exhibited by the Feeney brothers from Enniscrone in County Sligo. The 15 month old bull catalogued with a page full of stars, which included a five star terminal and replacement index, alongside a well below average calving figure of 4.5%.

Goldstar Pianoman ET who sold for €8,750

Following on from their success at the Elite Heifer Sale in November, Martin Ryan and family from County Tipperary once again were in the limelight, trading their 15 month old Goldstar Pianoman ET for €8,750. He is a son of the popular Goldstar Echo, and the home bred Tombapik daughter, Goldstar Nightengale. He sold with a 5 star terminal index of €143 and a calving figure of 6.1%. He also went North to a suckler farmer from County Tyrone. 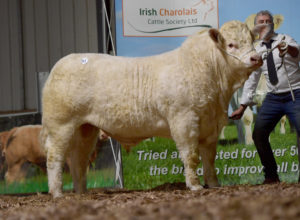 Jon Regan from Castelgal in County Leitrim had to wait until the end of the sale to receive a call of €8,400 for his 13 month old Liscally Pied Piper ET. The second last bull into the ring, this stylish young bull is a son of the great Domino and the Kelton Trident daughter, Liscally Iris. He sold with a whopping terminal index of €161 and a calving figure of 7%. Suckler farmer Dominic Brady from County Cavan had the final call on this one. 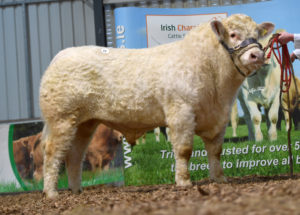 Kilvilcorris Prince who sold for €7,000

Matt and PJ Ryan from Borrisoleigh in County Tipperary sold their three offering’s for an average of €6,316. Topping their trade was the June 2019 born Kilvilcorris Prince at €7,000, a son of Fiston and an Enfield Plexus bred dam. He sold with a five star terminal index of €162 and a calving figure of 5.3%. This one went across the Irish Sea to Owain Llyr in Wales. 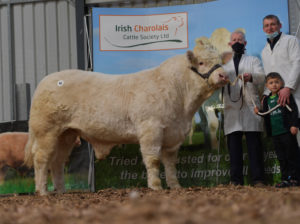 Carrowquil Pirate who sold for €7,000

Local man Dermott Foley from Kilmore in County Roscommon hit the €7,000 mark with his 15 month old Carrowquill Pirate. This classy son of CF 52 goes back to a Kilmore bred dam by Gerard. He sold with a five star terminal index of €152 and a calving figure of 6.1%, he also carries one copy of the F94L profit gene. He will now take up residence in Redhills in County Cavan. 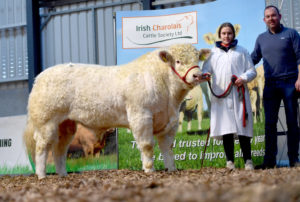 Peter Mc Laughlin from Redhills in County Cavan had a wonderful day out, trading his three bulls for a total sum of €18,000. Topping his trade was Aquanchoua Pinto ET, a son of the legendary CF 52 and a home bred Mogador sired dam. Pinto packed a massive terminal index of €166 and a calving figure of 9%. Like many of the high priced bulls, he sold with one copy of the Q204X and F94L myostatin genes. He went North to a suckler farmer in Newry. 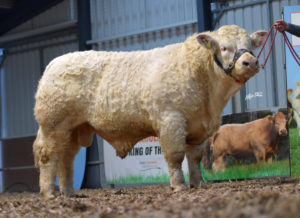 The Roughan herd owned by Pat Mc Clean from County Donegal sold their three stablemates for an average of €6,585. Leading their charge was Roughan Picasso and Roughan Pete at €6,750 a piece, two June 2019 born bulls. The herd mates are sons of the outstanding Roughan Gibraltar and homebred Roughan dams. The pair displayed a catalogue full of stars, consisting of five star replacement and terminal indexes, as well as each carrying one copy of the F94L profit gene. Picasso sold to County Cavan, while Pete went South to County Kerry with Dan O Sullivan. 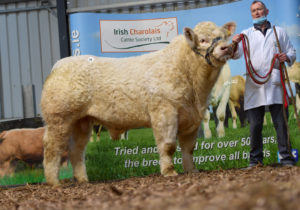 Kilvilcorris Phoenix who sold for €6,750

Another bull sharing the price tag of €6,750 was Kilvilcorris Phoenix, exhibited by Matt and PJ Ryan from County Tipperary. This May 2019 born bull is a son of the herd’s stock bull Bunratty Mike Tyson and a Sesame bred dam. He sold with a five star terminal index of €141 and a calving figure of 6%. William Allen from Moate in County Westmeath was the successful bidder on this one. The Ryan’s wrapped up a tremendous day out when they exchanged Kilvilcorris Pete for €5,200. This July 2019 born son of Fiston went for export selling to Owain Llyr in Wales.

The newly founded Bud herd based in Athboy in County Westmeath had another productive day in Elphin, selling their May 2019 born Bud Purcell for €6,500. Their first day out in Elphin last December seen them sell Bud Orpheus to Dovea AI for €11,500. This year’s bull is a son of Drumconnor Ennis and a Pirate bred dam. He sold North to County Antrim. 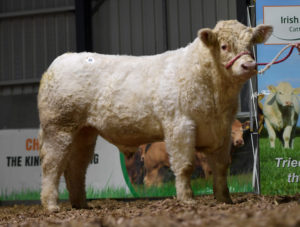 McDermotts Perfection who sold for €6,500

McDermotts Perfection exhibited by Kevin Mc Dermott from County Donegal went under the hammer at €6,500. A son of the ever consistent Goldstar Echo and a Bova Sylvain bred dam. This 14 month bull sold to Mary Gilbride from Drumkeerin in County Leitrim. 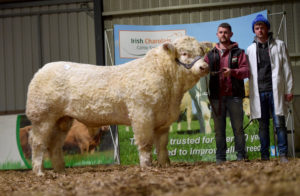 The fourth last bull into the ring, Cloonglasna11 Padraig exhibited by the Egan brothers from Ballina in County Mayo flew all the way to €6,300. The young 13 month old son of Major displayed lots of potential, as well as carrying Cloverfield Excellent and CF 52 in his dam line. Buyers of this one were S and D Bothwell from Killadeas in County Fermanagh. 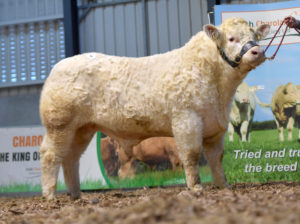 The third offering from the Roughan herd who sold for €6,250 was Roughan Peader, another son of the aforementioned Roughan Gibraltar, this time out of a Roughan Echo 2 bred dam. Once again this Donegal bred bull displayed a five star terminal index of €151, a calving figure of 4.9% and carries one copy of the F94L gene. He was snapped up by John O Dea, a suckler farmer from County Clare. 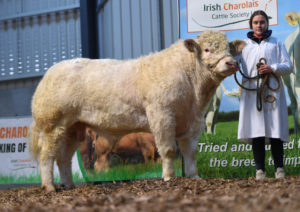 Peter Mc Laughlin from County Cavan was back in action again when he parted company with Aquanchoua Pinay ET for €6,100. Pinay is a full ET brother to the previously mentioned Aquanchoua Pinto ET. James O Kane from Northern Ireland snapped up this high terminal index young bull.

The Quin’s from Newmarket on fergus in County Clare realised €6,000 for their 17 month old Clenagh Premier. A son of the home bred Clenagh Hank and Clenagh Jade, this stylish bull sold with a five star terminal index of €168, a calving figure of 6% and carries one copy of that ever attractive F94L gene. 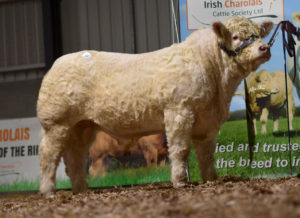 One of the youngest lots on the day, Colomane Prince 2 exhibited by John Ward from County Cork proved one of the more attractive lots for many viewers. Sired by the 2016 Christmas Cracker Champion Clenagh Lyle, Prince went under Tom Cox’s hammer at €5,750. The stylish young bull carries a five star terminal index and one copy of the Q204X gene. Also hitting €5,750 was Aughnasheelin Pete 2, a son of Fiston out of a CF 52 bred dam. Exhibited by Michael Mc Girl from County Leitrim, the 15 month old Pete sold with a five star terminal index and a 6% calving figure. He went North to a suckler farmer in County Antrim. 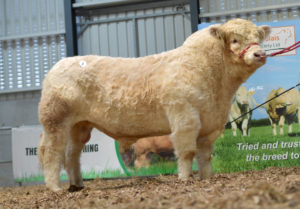 The Callaghan brothers from Swinford in County Mayo traded Tonroe Pirate for €5,400. One of the earlier lots into the ring, the Mayo bred bull is a son of Tonroe Eminem and a TZA bred dam. He catalogued with a five star terminal index and a calving figure of 4.8%. Seamus Canning from Loughrea in County Galway acquired this lot. 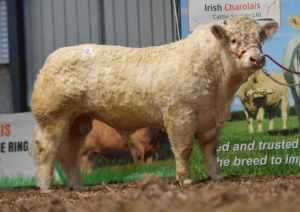 The Kingham brothers from Culloville in County Monaghan offered Culla Porto for sale, a son of Nelson out of a Fury Action bred dam. Short on stars but high on quality, Porto romped his way to €5,300, selling to Seamus Ruddy from County Mayo.

€5,300 for Tonyglasson Pauric ET sired by CF 52 and exhibited by Martin Hughes from County Monaghan

€5,200 for Laheens Perfection ET sired by Goldstar Echo and exhibited by Cormac Duignan from County Leitrim

€5,100 for Dereskit President sired by Dereskit Jacob and exhibited by Basil Bothwell from County Cavan

€5,100 for Dalehill Pluto sired by Fiston and exhibited by Basil Kells from County Cavan

€5,000 for Aquanchoua Pierre ET sired by CF 52 and exhibited by Peter Mc Laughlin from County Cavan

€5,000 for Portanure Preacher sired by Fiston and exhibited by Gerard Farrell from County Longford

€5,000 for Moheedian Pablo sired by Ashleigh Admiral and exhibited by Val Keane from County Roscommon

The Society would like to thank all viewers and purchasers for their compliance with the guidelines on the day. We would also like to congratulate the breeders on putting on a tremendous display of Charolais bulls once again. But most of all, we would like to sincerely thank the out going Elphin Mart Manager, Gerry Connellan. Gerry will retire as Elphin Mart Manager this week, after 26 years of service. He has been a wonderful advocate of the Charolais breed and suckler farming in general. He was always a pleasure to work with over the last five years. An honest, straight, decent man, that will be dearly missed. Thanks for everything Gerry, wishing you all the best in your retirement, from the Irish Charolais Cattle Society.