Last Saturday Tullamore Mart played host to the third Society Sale of the year. Once again Covid restrictions were in place, with registered buyers getting the opportunity to view the bulls on the morning of the sale and all bidding online. Like many pedigree sales this spring, the number of bulls in attendance on the day was much lower than what was catalogued, with many selling on farms prior to the Sale. Overall 33 bulls sold to an average of €3,550. Topping the trade at €8,000 was the last bull into ring, Crossmolina Rambo. The property of Alan Wood from County Mayo, Rambo was just 12 months old. He is a son of the French sire Berry Mic and a Harestone Hercules bred dam, who goes back to CF 52. The young Crossmolina bred bull carries one copy of both the F94L and the Q204X Myostatin genes. He will now join Neil and Stuart Barclay’s Harestone herd in the UK. 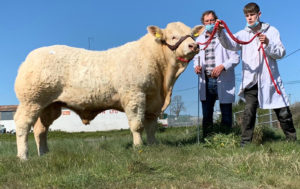 Crossmolina Rambo who sold for the top price of €8,000

Shortly before Rambo hit the headline’s for the Mayo men, his herd mate, Crossmolina Royal went under Tom Cox’s hammer at €4,000. This bull was just 13 months old and is a son of CF 52. He sold with a five star terminal index of €147 and carries one copy of the Q204X gene.

Selling for the second highest price of €6,900 was another Mayo bred bull, Cuillmore Ryan exhibited by Tom Keane from Westport. This 13 month old bull is a son of the great CF 52 and a Pirate bred dam. He catalogued with a five star terminal index of €153 and a calving figure of 6.6% on beef cows. He also carries one copy of the Q204X gene. Snapping this one up was a suckler farmer from County Clare. 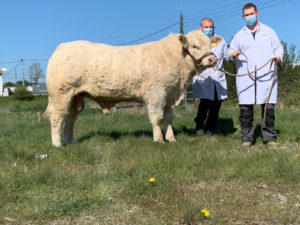 Next best at €6,400 was Brocca Powerful Genetics ET from John Barry Moran in County Westmeath. Born in November 2019, this well made son of Domino and Jupiter bred dam catalogued with a five star terminal index of €153 and a calving figure of 8.6% on beef cows. Once again he carries on copy of the Q gene. He sold North to County Tyrone. 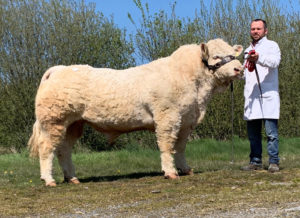 The Roughan herd owned by Pat Mc Clean in County Donegal had a successful day at the Office, selling two bulls for a total of €10,000. First up was Roughan Phelix 2 at €5,000. A son of Roughan dix de cow and a Roughan Galant bred dam, this bull sold with a four star terminal index of €136 and a calving figure of 6.9% on beef cows. His stable mate, Roughan Profit 2, then traded outside the ring at €5,000. The sire of this one is Roughan Gibraltar and the dam is a daughter of Roughan Divin. This bull was certainly not short on indexes, selling with a page full of stars and a calving figure of 5.4% on beef cows. Both bulls sold to suckler farmers in the South.

Matt and PJ Ryan from Borrisoleigh in County Tipperary had a productive day’s trading, selling all four of their entries for an average of €3,925. Leading their charge at €4,300 was Kilvilcorris Paddy, a son of Cloverfield Excellent and a CF 52 bred dam. This 18 month old bull packed a whopping terminal index of €162 and a calving figure of 5.8% on beef cows. Next best for the Ryan’s was Kilvilcorris Padjo 2 at €4,100. A son of the popular Fiston and a Blelack digger bred dam, this 16 month old bull catalogued with a decorative set of indexes, which included a terminal index of €158, a replacement index of €135 and a calving figure of just 4.6% on beef cows. Kilvilcorris Philip and Kilvilcorris PJ wrapped up proceedings for the Tipperary men, selling for €3,600 and €3,700 respectively.

Other leading prices from the Sale included:

€4,050 for Makief Phil sired by Fiston and exhibited by Derek Woods from County Cavan

€3,800 for Noble Rebel sired by Goldstar Echo and exhibited by Harry Noble from County Longford

€3,800 for Derryolam Robert sired by Fiston and exhibited by Niall Mc Nally from County Monaghan

€3,750 for Maghermore Ronaldo ET sired by Enfield Plexus and exhibited by Michael Grant from County Donegal

€3,700 for Blackroad Riviere sired by Bivoauc and exhibited by Jack Culloty from County Kerry