It was extremely positive to see Irish Charolais genetics feature so well at the recent sales held in Carlisle and Swatragh. Both Sales witnessed strong clearances and achieved fantastic averages, a reflection of the demand for Charolais cattle across the UK and Ireland at present. Flying the flag for Irish genetics at Carlisle was Rosanna Jupiter, a bull that has certainly left his mark in the Caylers herd, owned by the Barker family in the UK. Jupiter was bred by Pat Stephens in County Carlow and has bred exceptionally well in the UK in recent years. Two of his sons, Caylers Rocky and Caylers Rambo continued that trend in Carlisle, selling for 14,000 gns and 12,000 gns, respectively. 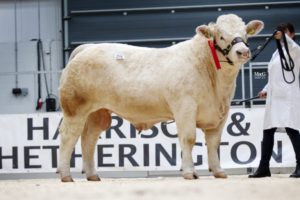 Up first at 14,000 gns was Caylers Rocky, who along with several other bulls from the Caylers herd made the long trip to Carlisle worthwhile for the Barker’s. Rocky was born in January 2020 to Caylers Glamour, a daughter of Thrunton Dominator. Having picked up a red rosette in the pre-sale show, he later sold to Mr. H Goldie. 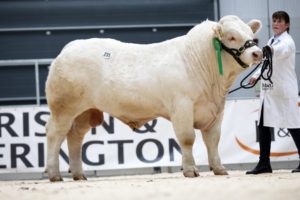 Following hot on his heels at 12,000 gns was his stable mate, Caylers Rambo, a 14-month-old bull also sired by the award-winning Rosanna Jupiter. The dam of Rambo is Caylers Heidi, a daughter of the 10,000gns Thrunton Alpha. Rambo displayed attractive EBVs in addition to a superb calving ease of +11.7, and will now take up residence in Blackmill, Bridgend with new owner Williams Partners. 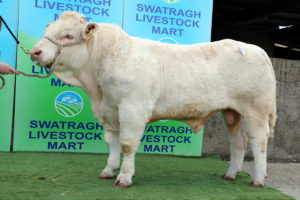 Prestige Peter who sold for 5,500 gns in Swatragh

More recently in Swatragh in Northern Ireland, the Irish bred bull, Prestige Peter, topped the sale selling for 5,500 gns. Peter was exhibited by A Armstrong from Dromore in County Tyrone. This 17-month-old bull was originally bred in Southern Ireland by Brian Brislane, Nenagh, Co. Tipperary. Sired by the popular NCBC sire Cavelands Fenian, his dam is Bostonia Lizzie, a Balmyle Vagabond daughter bred in County Sligo.