The third prize winner in the large herds category of this year’s ICCS Suckler Herds Competition is Conor and Brendan Daveron from Kilnaboy, County Clare. This herd is located in the heart of the Burren, and what a fascinating herd it is. It integrates a thriving suckler herd and biodiversity in an impressive and sustainable manner. The herd consists of approximately 35 suckler cows, all spring calving. A Charolais stock bull is run with the cows every year, with a small number of cows put to AI to keep replacements coming into the herd. 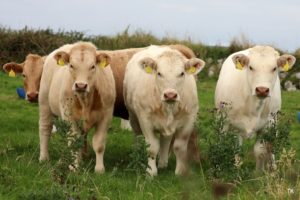 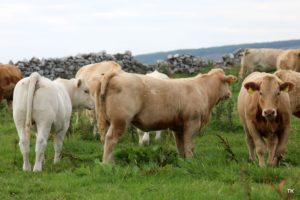 The predominant breed of cows on the farm is Charolais, with a small number of Limousin crosses kept in the mix. Some of the Charolais cross cows on the farm are sired by the herd’s previous stock bull, Bonnavella Mark. A son of Pirate out of a Oscar bred dam, Mark was bred by Martin Killeen from Mullagh in County Clare. Some of the older cows in the herd are daughters of an Organdi bred stock bull. The cows of both bulls are nothing short of outstanding, both in terms of breeding phenotypically good calves, and efficient in all maternal aspects. Milk is clearly in abundance on this farm, with calves bursting with sheer natural weight gain and performance. 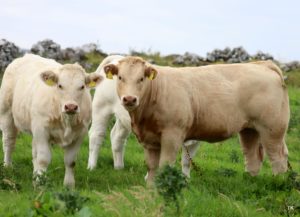 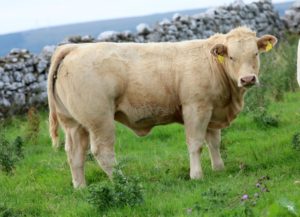 One of the really outstanding qualities on this farm is it’s efficiency in terms of land type.  The land on this farm could only be described as marginal. The performance of the cattle is absolutely phenomenal for that reason alone. Cows are outwintered on the Burren, with no silage fed before January. Cows are given 2kg of meal per head per day from the end of December until calving in the Spring. All cows are calved indoors and returned outdoors 10 days after calving. The Summer grazing period in this area is short, so the Daveron’s must make the best possible use of the grass they grow. In order to do this they implement a strip grazing system throughout the Summer. 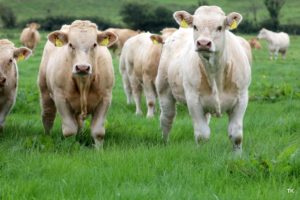 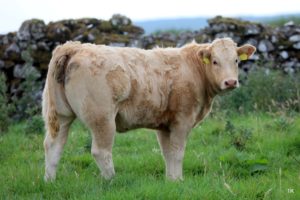 The performance figures of the Charolais cows in this herd are simply stunning. The average calving interval of the herd is 352 days, putting it in the top 5% nationally. The number of calves produced per cow per year is a remarkable 1.04. The % of heifers calved down between 22-26 months is even more impressive, at 75%. We must remember this tremendous performance is being achieved with Charolais cross cows and heifers, on very marginal land in the soul of the Burren. 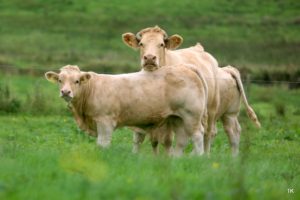 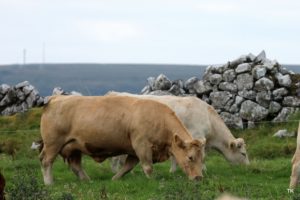 Charolais cross cows on the farm

The herd’s current Charolais stock bull is Knockroeview Owen. Bred by fellow Clare man, Michael Clancy, Owen is a son of Fiston, out of a Roundhill Doc bred dam. According to the Daveron’s, his calves are some of the best ever produced in the herd. This year’s Charolais cross weanling bulls have just been sold in Ennis Mart. They averaged 375kgs and sold for an average of €1,145, at an average age of just 7 months old. It must be noted that these bull calves were only introduced to creep 6 weeks ago prior to weaning. This year’s heifer calves are some the best ever produced from the herd and will go for sale in Ennis Mart, next Tuesday the 12th of October. 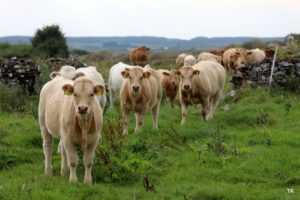 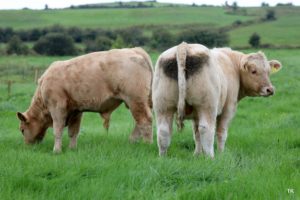 This herd was unlucky to go up against much bigger herds in the large category this year. It brought qualities to the fore that put it out on it’s own in many aspects. It exemplifies everything an ideal suckler herd should be. The Charolais cross cows on this farm prove that they are as good as any suckler cow, when the genetics and management are right. Once again it proves that Charolais is untouchable, as regards a terminal sire. Congratulations must go to the Daveron’s for creating this real masterpiece of a suckler herd. A truly fantastic herd, based in a majestic, environmentally friendly part of the world. 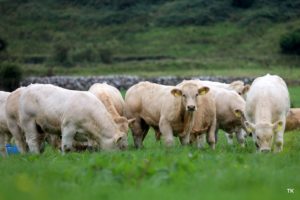 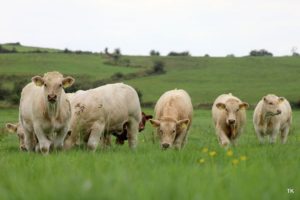